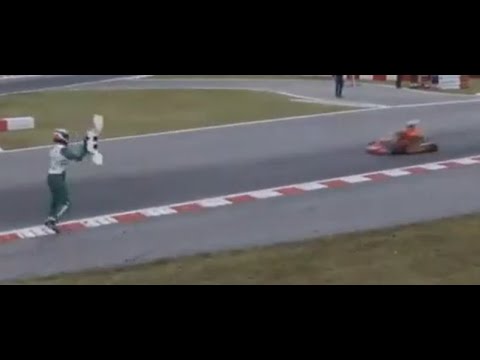 The FIA KZ World Kart Championship went down on Sunday, but instead of just racing through it and competing to win like a normal person, one driver COMPLETELY LOST HIS S**T AND ALMOST KILLED ANOTHER ONE BY THROWING A BUMPER ON THE TRACK IN THE MIDDLE OF THE RACE!

No, seriously! You have to watch this short video clip (above) to believe the insanity! In it, you can see Italian Kart driver Luca Corberi pick up a bumper after an apparent crash, calmly walk out to the side of the road — where other drivers are FLYING by — and wait until the guy he wants comes by and he tosses the bumper out to hit his car!

The 23-year-old driver clearly shocked the announcer covering the race, who called the actions “absolutely unacceptable,” but they are worse than that, if we’re being honest. Honestly, Corberi is lucky he didn’t kill somebody with that thing — or get severely injured or killed, himself, had he been hit by one of the karts!!!

According to TMZ, Corberi had reportedly been disqualified from the race for coming into contact with another driver — presumably the one he was mad at here — and, well, one unfortunate thing led to another. And worse yet, Corberi apparently missed the guy he was trying to hit, and the driver the bumper struck instead was reportedly just an innocent racer uninvolved in the controversy. WHAT?! That whole video is CRAZY!

And as if that’s not crazy enough, watch what happened in the pits after the race (below), where a full-fledged fight immediately breaks out after Corberi allegedly goes to attack the driver he had initially targeted:

Kart fans are calling for a lifetime ban for Corberi’s actions, considering he legitimately could have killed somebody if something had gone really wrong with the bumper-throwing incident. We’ve seen plenty of videos of people losing their tempers in sports-related incidents, and athletes getting into fights during games and all that, too, but this one seriously takes the cake. Talk about taking things to another (totally irrational) level. And the fight after the incident on the track is crazy, too! Where did they find these people?! (And specifically, Corberi! LOLz!)

We don’t really know what the usual penalties are for Kart racing infractions, but this s**t is f**ked, man!

Looks like the terrible year that is 2020 has even affected niche racing communities!!!

Yosef Aborady: Get to Know This Season’s Bachelorette…

A Few Very Important Words From Spencer Pratt! | The Hills

Shawn Mendes & Camila Cabello Pictured Together For The…

Cardi B Brags About Being ‘Single, Bad & Rich’ 3 Weeks…