Max Ehrich Posts Pic With ANOTHER WOMAN Already! And You May Know Her…

Seriously, this guy has been NON-STOP since his split with Demi Lovato. First he’s trying to win her back, then he’s claiming they’re still technically together, next he’s accusing her of using him for PR, then he’s allegedly sending fans erratic messages… we almost can’t keep up with all the breakup dramatics!

We thought that weeping on the beach where he proposed to the pop star would be the peak of Ehrich’s post-Demi era, but of course, the actor had another move up his sleeve. And this one’s basically the oldest trick in the book: yup, after all the tears and heartbreak, he’s already posted a picture of himself with another woman.

The lady in question appeared on Max’s Instagram in a paparazzi shot where the pair look quite close. There is no caption on the pic — but the message is clear. He’s over Demi and with a NEW pop singer.

Oh, did we fail to mention that part? Yep, the mystery gal is none other than Sonika Vaid! If that name sounds familiar, it should if you’re still watching American Idol! The singer placed 5th on the 15th season of the competition show. Of course, she never did become a big star afterward like so many AI alumni…

And don’t worry, Sonika knows what’s up. Max also posted a solo shot from the same occasion, upon which his new lady friend commented

If you were in the camp that accused Ehrich of calling the paparazzi to set up those “candid” photos in which he wept on the beach, you may also be suspicious of this pic. After all, these are two fairly low level celebrities for a photog to be tracking down. On the other hand, in just over two weeks since the split (yeah… it’s only been two weeks), the Young and the Restless alum has definitely made a name for himself as Demi’s relentless ex.

Whether this is a genuine rebound, a casual friendship, or a shameless PR ploy, we obviously can’t say for sure. It certainly does seem suspect how the 29-year-old went from mourning one relationship to flaunting a new one in like 72 hours.

Perhaps they’re bonding over their music careers, considering TMZ reported that a new single from Ehrich is imminent. The track, said to be released on Friday, is apparently about his relationship with Demi and “how he couldn’t sleep because he knew he wanted to be with her forever.” Kinda funny how TMZ has the inside scoop on the subject matter, huh?

Whatever Max’s endgame is, he’d better tread carefully. Not only has he gotten called out by fans, the Heart Attack artist may have gotten lawyers involved to put an end to his alleged harassment. All those upsetting messages to fans probably won’t help his case — although unsurprisingly, Ehrich has already claimed he was “hacked.” 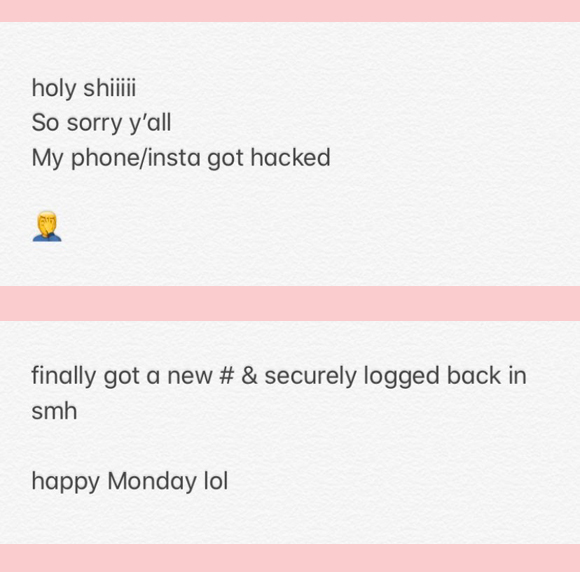 When a flurry of erratic messages to fans came to light, the actor claimed he was hacked… / (c) Max Ehrich/Instagram

This breakup has had so many dramatic twists and turns, it’s starting to feel like the soap opera where Max made his name. We can’t imagine what storyline he’ll come up with next…

Toni Braxton Goes HARD At Sister Tamar’s ‘Weasel’ Ex-Boyfriend: ‘You Are Beyond Contempt’

Shawn Mendes & Camila Cabello Pictured Together For The…

Jinger Duggar to Fans: Don’t Hate On Me For Drinking…

Why Scheana Shay Will NEVER Be Friends With Lala Kent Or…