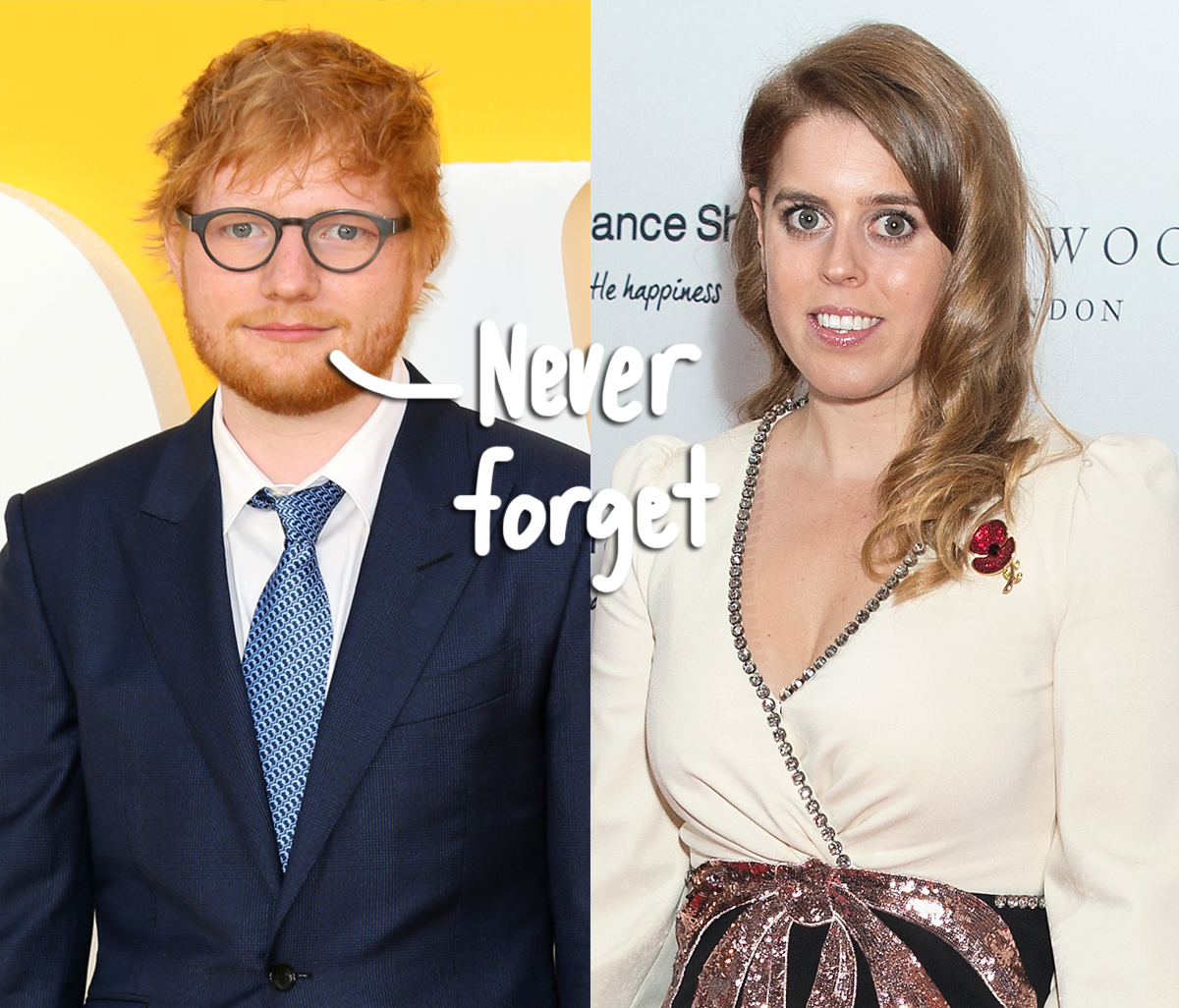 Apparently, the tale of The Pop Star and the Princess’ Sword is NOT just a fairy tale!

Once upon a time, back in 2016, rumors swirled that Princess Beatrice accidentally cut Ed Sheeran’s face with a sword when she was goofing off at a dinner party.

A source told The Sun at the time:

“Ed had been invited to dinner as a guest of Princess Beatrice. They all sat down and there were 20 or so guests, including Sarah Ferguson, James Blunt, and his wife Sofia Wellesley. As the night wore on they started talking about honours and apparently James Blunt joked that he would love a knighthood. Beatrice jokingly said she could arrange it and fetched a ceremonial sword. Beatrice, who was in great form, held the sword above him and said ‘arise Sir James’, just like her nan [Queen Elizabeth II] would at the Palace. But she must have misjudged the weight or something and, instead of lightly tapping him on the shoulder, she swung it back, not knowing Ed was standing right behind her. The blade cut into his face and it was just a few inches from his right eye.”

Despite the fact that the Divide singer had a very real scar on his face, the story was dismissed as false. Blunt alleged that Teddy was the cause of his injury, claiming that the fellow artist was “drunk, messing around, and he cut himself,” then lied about it to the press.

Well, it appears that Blunt may have just been covering for Beatrice after all — because, according to Ed’s manager Stuart Camp, the “f**king idiot” royal was indeed the face-slicing culprit!

In a new interview with The Telegraph, the music manager dished:

“I got quite protective over that. Because we’ve never publicly commented on it. But certain people said, ‘Oh, you should lie and say it wasn’t her and say it was someone else.’ I said, ‘Well, we’re not telling anyone anything. I’m not lying, just because someone’s a f**king idiot.’ Because they’re thinking, yeah, I will get paralytic and take a sword off the wall. You’re just asking for trouble. You know, we’ve not heard hide nor hair from her since.”

Wow! Ain’t that a slash in the face…

Related: Ed Admits His ‘Addictive Personality’ Led Him To Binge Eat & Drink Until He Was ‘Sick’

The 29-year-old singer-songwriter addressed what led to the stitches in his cheek in a 2017 interview with Absolute Radio, without naming the princess as his attacker. He shared:

“I got hit in the face, and I was like, all right, OK, and then started carrying on. And then I looked down at my shirt and it was just completely covered in blood. And everyone was kind of gaping open-mouthed at me. What, have I got a nosebleed or something? What’s happened?”

While neither Ed nor his team have apparently heard from Beatrice since the alleged incident, the star remains friendly with other members of the royal family. In October, he participated in a project with Prince Harry for World Mental Health Day.

Hopefully one day Ed and Bea can patch things up. If faces can heal, so can their strained friendship!

Heck, if he continues being so popular for another decade he could end up getting knighted for real! He’ll be the first one to flinch! LOLz!

Jim Bob Duggar: Is He Burning Through His Kids’ Inheritance?

Kristen Stewart Opens Up About The Pressure Of Coming Out As Queer In Public — & Why It’s So Much Better Now!

Kylie Jenner Grabs Her Own Boobs, Gets Roasted For Weird…